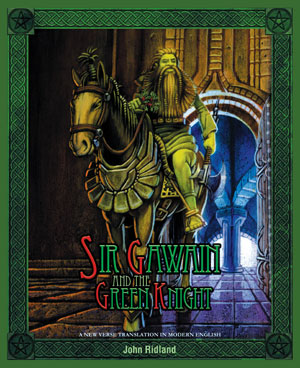 Sir Gawain and the Green Knight

Sir Gawain and the Green Knight

Sir Gawain and the Green Knight by the anonymous Gawain-Poet (or Pearl-Poet) is, like Beowulf, one of the greatest classics of English literature. Hailed as the finest Arthurian romance, this technically brilliant tale of enchantment, faith, temptation, and chivalry is tautly constructed, with a wonderfully rich vocabulary and vivid language that blends sophisticated atmosphere with psychological depth.
John Ridland’s new Modern English translation, unlike most presentations, is complete, covering every passage and word of the Middle English, Northwest Midland dialect original with the same line numbering, contents and meaning. His is the only version written in a familiar modern meter—pleasurable to modern ears, yet retaining the spirit of repetition and alliteration of the medieval original. And Dr. Ridland’s introduction and notes are enlightening. This translation is a must-have for unlocking all the pleasures and delights of the original classic.

PRAISE FOR SIR GAWAIN AND THE GREEN KNIGHT – Translated by John Ridland:

With his loving rendition of a great classic into vigorous metrical lines, John Ridland has given Sir Gawain and the Green Knight a fresh lease on life.  I’ve seen several other versions of this masterpiece, but none so engagingly readable as Ridland’s.  His preface, too, is  useful and illuminating.  Here is a book to enjoy right now and to cherish forever.
— X.J. Kennedy, author of Fits of Concision: Collected Poems of Six or Fewer Lines

John Ridland gives us a recognizably English Gawain, and a very pleasurable one at that.  The language is ours.  It is slightly elevated, as befits a work so finely crafted, but only enough to demand our attention.  Better yet, the verse is recognizably English as well.  Originally written in the same alliterative verse as Beowulf, Sir Gawain and the Green Knight was archaic in its own day; now, over six-hundred years later, alliterative verse can be as inaccessible as the pentatonic harp tunes that apparently accompanied it.  Ridland gives the poem a long, loose line that sings in the lyrical passages, creeps in the spooky ones, and cavorts in the comic ones.  Just as important, the densely mythic ethos, fully intact, enriches every word.
— Richard Wakefield, author of A Vertical Mile

Panoramas of banqueting and hunting, closely observed rituals of dressing, arming, and game preparation, and rich descriptions of landscape and weather—Ridland’s translation presents these in all their delightful, over-the-top particularity.
— Maryann Corbett (from the foreword), author of Mid Evil

The language in which the consummate poet and translator John Ridland serves up this delicious story in verse is exactly what it deserves. The descriptions are exuberant, the narrative flows and exhilarates like the wine at the courts we’re asked to imagine, and the exchanges between complex characters so subtly flavored by intelligent diplomacy that it makes the dialogue of much current fiction seem, by contrast, like a six-pack on the front stoop. Read this book. I can’t promise that you will find in it exactly what I have found, because I suspect that, like all enchantments, it shifts and assumes different forms to different eyes. But I do guarantee surprises, and inexhaustible delight.
— Rhina P. Espaillat, author of Her Place in These Designs

John Ridland was born in London in 1933 to British parents. When he was two, his family immigrated to California where he has lived most of his life. Four years at Swarthmore College were followed by two in the United States Army in Puerto Rico. In 1956 he entered graduate studies at Berkeley where he met and married Muriel Thomas from New Zealand, a fellow graduate student. In 1964 he completed a PhD from Claremont Graduate University. Dr. Ridland taught English at the University of California, Santa Barbara, for forty-three years, including three years based in Melbourne as director for the UC Education Abroad Program in Australia. His book publications include A Brahms Card Ballad (2007), first published in Hungarian translation (2004), Happy in an Ordinary Thing (2013), and a book-length translation of Petöfi’s John the Valiant (1999). With his essential collaborator, Dr. Peter Czipott, Dr. Ridland has translated several other Hungarian poets, including Sándor Márai’s The Withering World (Alma Classics, 2013) and Miklos Rádnoti’s All That Still Matters at All (New American Press, 2014). In 2014 Askew Publications issued his epic poem, A. Lincolniad.